We are very excited to be presenting the new Late-Night Series: What you See is What you Get at this year’s new incarnation of dance:made in canada/fait au canada. This program drawn by lottery features five short dances by different choreographers, from emerging to established at a new late-night time slot of 11 p.m.

I am especially excited as I am performing a new work by Sylvie Bouchard in the Late-Night Series. How I’m going to stay awake and energized to perform at 11 p.m I don’t know! I’m sure that the excitement of the festival will pull me through though! We had technical rehearsal yesterday and stepping onto the huge and amazing stage at the Betty Oliphant was quite incredible. I had forgotten the vastness of the space!

I am thrilled and very proud to be dancing Sylvie’s new work La vie, one part of a piece that will hopefully expand in the future. It is quite magical, with many surprises! Please come out and see for yourself!

Sylvie Bouchard
La vie was created with and for Mairéad Filgate and recreates a character’s interior world, her fears, dreams and questioning; and her ambivalence towards what she is leaving behind in order to move forward.
Photo: Ömer Yükseker

And of course four other exciting new works: 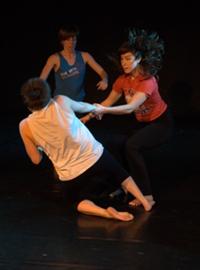 the moment before… situates three dancers on stage 10 minutes before they’re about to perform, observing their neurotic rituals of preparation. In a pressure cooker of irritability, stomach cramps, and sabotage, they are forced to come to terms with the inevitable.
Photo: Ömer Yükseker 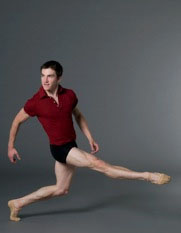 Salut D’Amour was first performed by Jillian Vanstone as part of a cultural exchange in Kenya in January 2011, in connection with a project by Artbound in support of Free the Children.  This dance will now be presented alongside a new work, Liebeslied, to be danced by choreographer Robert Stephen.

Suspended in a passage-way, a space-between; looking at the door, wanting to go through it and move forward. Balanced Corridors is inspired by several recent changes and new phases that I have experienced in my life.  It is a physical exploration of change, adjustment and balance commenting on the emotional extremes of fear, excitement, joy and frustration.
Photo: Erica Cheah 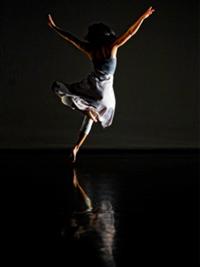 Box Step – Sometimes I feel surrounded by preconceived notions of how I should act and who I should be. While others around me seem to fit so nicely, function so perfectly, despite any restrictions. What is it that I am lacking that leaves me feeling so awkward and unsure – so boxed in.
Photo: Iden Ford

the moment before& – choreographed by Andrea Spaziani and performed by Spaziani with Amanda Acorn and Lauren Cook.